"Provide you with an English lesson which will not only help you to learn English, but will also guide you into making the right career choices...
ifriendly will motivate you, challenge you and above all will not rip you off!!
It does not have to cost a fortune to learn English!

Good teachers need their students to work at a their own pace, learn at their own rhythm... Homework should not be compulsory, but a way to learn faster".  Your ifriendly teacher ...Lisa Jane Grant


Here we will work together to make English accessible for everyone! Not just for those of you who are lucky enough to afford private tuition.

The history of film making:

Listen to the first 3 minutes of this BBC Radio 4 programme and answer the questions below;

*Remember: Don't worry if you can't understand every word!

1. How did the Lumiere Brothers frighten their live audience?

2. What do you think Penny means by the phrase "mind jumps"?

3. When and where was the very first film shot?

4. What does Penny claim was in the North of England in the early years of the 20th Century?


Discussion:
Now discuss a film you have enjoyed... could be a romance, a comedy or another action film. Talk about the location of the film.

Writing:
Now watch a clip of your chosen film on Youtube, make some notes about the location it was made.

If you are in a group, discuss your ideas...

Creative Writing: C1+
Imagine you are a film maker; Write a short essay about a made up film and include; film title, story line and plot. Also think of a location you would like to visit in order to make this film. 200 words


Lumiere Brother's Arrival of the train

Posted by Unknown No comments:

Expressions to describe being poor...Adult 18 +

Ok, so it's still February... Christmas seems like it happened a year ago and miserable January is finally over... Thank goodness!  But February is still a nightmare, why? because our January salary was spent paying off Christmas.

Here are some expressions to express how poor you are:

I am piss-poor; without money, broke. "I'm not going out tonight... I'll be piss-poor until payday."

I am skint; A person who has no money, broke, poor. "I am so skint right now... Could you lend me a fiver?" 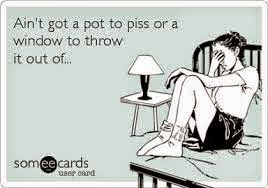 1. Find some more expressions/ slang that express being poor and practise using these expressions.

Posted by Unknown No comments:

Personally, I love accents... But they can be a little difficult if you are trying to learn any language.
You are even required to understand a variety of accents in the Cambridge exams!! Unbelievable! But... this does make sense.  Learning a language is all about communication and if you can understand the other person it makes life so much easier... Trust me... Not everyone speaks the 'Queens English'.

Which accents can you understand?
Which one makes you laugh?
Is there an accent you are not too fond of?

Task: Look at a map of the United Kingdom and talk about the accents, weather, landscapes, cities, etc.
Posted by Unknown No comments:

What do they mean? Have you tried saying these words quickly? Difficult, right?

Splinter; (noun) that tiny little piece of wood that gets stuck in your hand, finger, foot or toe...

Jack: "Ouch! I have a splinter in my finger and I can't get it out!"

Jill: "How did you manage that?"

Jack: "I was lifting up that wooden table, when I felt something sharp go into my middle finger,"

Jill: "You know you have to train really hard to be a sprinter!"

Spinster; (noun) an unmarried woman, who lives on her own nor has a partner.

Jack: "If you don't go out with me, you're gonna end up an old Spinster!"

Speedster; (noun) a person or a thing that operates well at high speed, for example a fast car!

Jill: "Please don't speed in the car Jack! It's dangerous!"

Jack: "No need to worry Jill! I'm a speedster!"

Please save the Koala...


This is not a plea for funding...

I fell in love with Koalas on our trip... We saw them in the wild and we got to cuddle a tame one too... Her name was Wilma and (as far as I was concerned) we bonded immediately!

Here are some facts you should know about the Koala:

They are not bears, so the term Koala bear is incorrect... they are really marsupials, they've been around for 42 million years. Yet today they're in danger.

1. Not a bear but a marsupial with a backwards pouch.

2. A blind jelly bean at birth, the baby Koala climbs unaided into its mother's pouch. Six months later it pops its head out.

B2: Reasearch and write an essay about the Koala.. Find out why they cannot be found anywhere else in the world; What they eat; Where they sleep; What could we do to save them from extinction?  150 - 200 words.

C1: Research and write a report about another endangered animal.

a plea; (noun) a request made in an urgent and emotional manner.

pouch; (noun) a small bag in which Koalas carry their babies... For further reading, click on the link below.


Posted by Unknown No comments: